I wonder why some men are able to handle big managerial issues in companies, institutions and nations, yet, they are unable to handle issues like alcohol, cigarette, women and other stuffs which slowly kill them. Some guys are taking pride in luring girls to their bed, yet, not curing or are unable to put to sleep that lust that lures them quickly to their grave or jeopardize their future. How shameful it is as a man to have control over other people and have the power to task other people with responsibilities but do not have power or control over your own self.

What makes a man fully aware of the possible consequence of a decision or an action borne out of lust, and yet go ahead to take them? This is because he is a slave to his body, so he cannot control his own passion. Like Samson who was fully aware of the threat and suicidal nature of an intimate relationship with Delilah but went on to do so. The mighty man, Samson, who was able to kill a lion and thousand Philistine soldiers could not kill his own passion. David, the slayer of the enemy champion Goliath. David, great king and warrior, who fought and killed over 50,000 enemy soldiers could not fight his own lust when he saw the nakedness of another man’s wife, Bathsheba.

Others may hurt us, but it is what we do to our own selves that often kill us.

A life that will leave me young, though I live long, I pray.

THE HAPPINESS OF A MAN IS OFTEN LIGHTENED BY THE MASTERY OF HIS PASSION. CONTROL YOUR PASSION, ELSE IT WILL LEAD YOU TO DESTRUCTION. 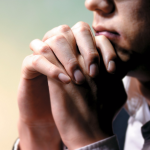 A revolutionary thinker and an Intellectual militant. "We demolish arguments and every pretension that sets itself up against the knowledge of God, and we take captive every thought to make it obedient to Christ." - Read more about me in the about section of the Menu.

COMMENT, I love to hear what you think. Cancel reply

More from my site

PROTECT YOUR HEART WITH YOUR MIND: Making rights choices in life

CONFESSION OF OUR DYING HEROES

INTRODUCTION TO THE HUMAN NATURE

Vision is what will get you a suitable woman, not money.

BUT SHE HAD A DIMPLE

Posted on 20/05/201905/07/2019 Author Richard Owusu Comment(0)
BUT SHE HAD A DIMPLE: When the spirit is willing but the flesh is weak. It was an unfair relationship for me as I found myself enduring, while she enjoys it. It was so because the endurer wanted it more than the enjoyer. Usually the one who loves more makes the sacrifice in a relationship. There were moments I wanted to quit but the remembrance of her dimples tempted me to always give her another chance to change, because I just couldn't imagine myself living without her smile that came along with her dimples. Indeed, the spirit is willing but the

Posted on 29/03/201905/07/2019 Author Richard Owusu Comments(16)
You cannot overlook the small in your quest for greatness because greatness is the accumulation of small great deeds. Be prepared to start small. Be prepared to start from somewhere. You are destined for greatness!  If God has chosen you to be great, the only way to prevent it is to do nothing! Because even your mistakes or the things you didn't expect to lead you to greatness somehow does. One things lead to the other, the other leads to another. You are destined for greatness! How much you want it is determined by how much you are willing